You may have noticed (or maybe you haven't...I, for one, never notice these sorts of things, so I won't judge you) that there's a new button in my sidebar with a picture of Jennifer Ehle as Elizabeth Bennett, drinking a cup of tea. As the badge says, I am now a member of the P&P95Forever Club! 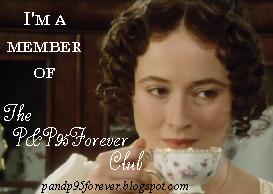 So what does this mean? Why should you care? What it means is that I'm taking my place among the ranks of "the opinionated, biased, and unswerving devotees of BBC/A&E's Pride and Prejudice." I'm not only admitting, but proudly defending my heartfelt devotion to this film adaptation of Jane Austen's classic.

I really love the BBC P&P. And I seriously question the loyalty of supposed Jane Austen fans who don't prefer it over any other version. (If this is you, don't worry, I'll still like you. Sort of.)

Anyway, I just wanted to let you know about this marvelous club, and to encourage you to join if you love the BBC P&P film! (You don't have to be as rabid a fan as I am, but if you do decide to join the Club, be aware that raving lunatics like me will probably be lurking in the shadows of the site...)
Posted by Unknown at 2:38 PM