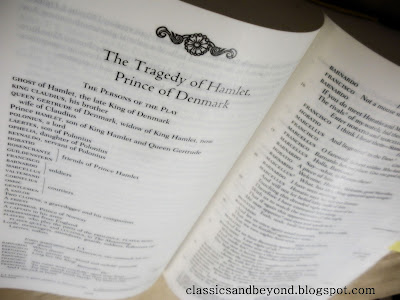 Quick note--photos are not my strong point. Taking them, editing them, figuring out how to incorporate them into the ol' blog...not really my thing. And I don't like the idea of randomly stealing other people's photos. But I finally had to admit to myself that everyone (including me) likes blogs better when they have lots of pictures. So I made this beautiful picture for you guys. Well, it's not that beautiful, but hey. I took it and edited it and I even put my website on the bottom and I feel very cool. (And if you want to use it, feel free. I know, I'm so generous.)

Hamlet is one of those great literary works that left me so utterly wowed that I almost can't say anything about it. The long list of literary things we could talk about is just far too overwhelming (and has already been done by people far more intelligent and educated than I), so I'll just share my emotional reaction with you.

I'm pretty sure I'd seen an adaptation of Hamlet or something before I read it this time, but I remembered very little about it, so it was almost like I was reading it for the first time. As I read, I watched an adaptation (one that was rather poorly done in my opinion, but was the only version my library had).

From the very beginning, I criticized the actor who played Hamlet, because I didn't think he understood the character. Yeah--I remembered next to nothing about this play, I had barely seen the character of Hamlet at all, and I already felt like I knew him. Hamlet is an erratic, emotional, crazy character, and yet I had no trouble identifying with him. While I was reading the play, Hamlet felt like me. Which is kind of scary to think about.

There are no characters in this play that win. (Sorry if I spoiled it for you.) Nobody comes out on top. Most people end up dead. The play carries with it a horrible feeling of desperation and hopelessness. You wouldn't think people would be so interested in it. And yet, it's the feeling of desperation that we all have. Does my life matter? Am I ever in control? Can I change my fate? Who can I trust? These are the questions the characters ask, and although our lives may not be quite as tragic, they're the questions we ask, too.

That's my take on Hamlet--and I know there are a million more. What do you think?
Posted by Unknown at 2:09 PM