"If you like Jane Austen, you'll like Evelina," my 18th-century Brit lit professor promised us before we began reading this book. I'd never heard of it, but I do like Austen, so I was interested to see if my professor was right.

So, was he? Am I going to send all you Janeites running out to the bookstore to buy Evelina? 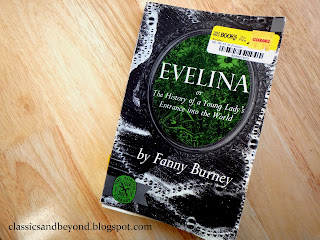 In a way, it was a lot like Jane Austen. Like I said, it's a story about a young woman coming out into society. Plus, it has other Austen-esque features, such as: romance, class issues (and sometimes, class issues IN romance--that's a bonus), marriage, annoying people who won't shut up, gender issues, propriety problems, and probably lots more.

But believe it or not, with all those similarities, this book really didn't feel much like Austen to me. It was somewhat darker. Unlike with Austen novels, the characters didn't spend all their time in the drawing-rooms of the gentry. The "improper" people weren't just snooty Catherine de Bourghs inviting young ladies to play their pianofortes; they were often genuinely cruel, rude, creepy, or just downright gross (or all of the above). Just a few of the events that would never show up in an Austen novel:

These sorts of things happen throughout the novel. It actually gets a little disturbing at times. Evelina's hands are pretty much tied; despite these constant atrocious pranks and accidents, she can't seem to do anything to protect herself or anyone else. Half the time, she's not even allowed to make her own choices.

Burney doesn't have the same kind of lighthearted irony that Austen does. Evelina has a pretty big dark side. But then again, so did 18th-century England--and I think Burney makes some points that needed to be made. Women really didn't have much freedom--if they were thrust into a group of people who refused to protect them properly, then they were pretty much done for. Thankfully, Evelina had a couple good friends and a stroke of luck that saved her in the end (so yes, it has a happy ending), but I had the feeling that she was barely making it out unscathed.

Have you ever read (or heard of) Evelina? What do you think of it?
Posted by Unknown at 3:41 PM