A Study in Scarlet by Arthur Conan Doyle

I've been meaning to read this book for years, and I only just got to it this year. Once I started reading it, I finished it in just a couple days. (First book of the year!...Don't worry, I finished it forever ago. I'm just behind on reviews.)

I think it would be hard for anyone to dislike this book (despite the weird Mormon stuff--which I'll get to in a minute). Like most people, I've seen adaptations of Sherlock Holmes and loved them. The original book did not disappoint. Holmes himself was just as awkward, egotistical, brilliant, condescending, and all-around fantastic as a character as every adaptation had made him out to be.

Now that I've seen the original character, I really love the way he lends himself to interpretation. Robert Downey, Jr. and Benedict Cumberbatch play Holmes in two distinct ways, and neither of these is the "original Holmes"--but each of them is right. There really is no "one Holmes" that everyone is trying to imitate. Sherlock Holmes is a character that can be taken in many different directions, and that's what I loved about him.

Goals for 2014 (and the sad truth about Bout of Books)

Last year, I made a few vague, last-minute goals for the new year. I was still new to blogging and I wasn't even sure what I was trying to accomplish in 2013. (I reviewed those goals in this post.) This year, though, I have just a bit of book blogging experience under my belt, and I've been able to come up with goals that I think will actually help focus my reading and blogging for the next year.

Excited for another round of Bout of Books? I am! 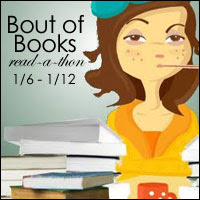 I don't know how much reading I'll actually be able to do given that it's the first week of school (reading aside from assigned reading, that is). So, my only goal is just to try to read for fun as much as I can in my spare time.

See you on Monday! I'll be reading!

So I mentioned in my last post that I was excited to do an end-of-year book survey. I've noticed that not everyone loves these, but I love reading them on other people's blog and this is my first chance to do one of my own! 2013 was a great year for reading and I'm excited to look back with this end-of-year survey hosted by Jamie at the Perpetual Page-Turner.

This is a serious toughie--as I think it is for all of us...so yeah, I'm totally breaking it down by genre.
Classic: The Mill on the Floss by George Eliot (still working on that review, by the way...)
Non-classic Fiction: The Paris Wife by Paula McLain
Non-classic Non-Fiction: This one is oddly the hardest to choose, but I think I'll go with Destiny of the Republic by Candice Millard and My Life in France by Julia Child...closely followed by Help, Thanks, Wow by Anne Lamott.
Read more »
Posted by Unknown at 6:49 PM 6 comments: