Destiny of the Republic by Candice Millard

I wasn't sure what to expect with Destiny of the Republic: A Tale of Madness, Medicine, and the Murder of a President by Candice Millard. Whose madness? What medicine? Which president? And what could the three possibly have in common? 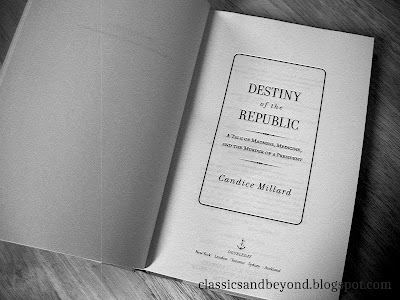 I'll tell you, by way of summary for those who haven't heard of this book. President: James Garfield. Madness: Charles Guiteau, the man who shot him. Medicine: What the doctors who treated Garfield knew woefully little about, leading to Garfield's untimely death.


(I thought about not saying that, but it's pretty obvious that Garfield is going to die. It's in the title, for Pete's sake.)

This book, like many other non-fiction books these days, was touted as "non-fiction for fiction lovers." And it  did not disappoint. The story itself was so shocking that, at times, it seemed too impossible to be true. Garfield was surprisingly amazing, Guiteau was wildly ghastly, and Garfield's doctor was sickeningly arrogant. I went through the book thinking, "Really? Really?!"

I'm no expert, but it was clear that Millard did her research. She did seem to be somewhat biased, but she also let the facts speak for themselves. The quotes she used were the best parts of the book. The story and her writing style combined made this book a page-turner.

Despite all this, the book was almost too sad to finish. At least in fiction, if the good guys lose, you can reassure yourself that it's just fiction. With this book, the ending was almost too difficult to bear--and the whole story happened over 100 years ago. I think that might have been what Millard was going for, though; by the end of the book, I felt some fraction of the loss that Americans felt back then. I felt a similar kind of anger at the men who contributed to Garfield's death. I felt the same disbelief and horror. And I think history deserves that. That's what I loved most about Destiny of the Republic--it made me understand.
Posted by Unknown at 8:50 PM