Make the Bread, Buy the Butter by Jennifer Reese

A couple of years ago, a family friend cut an article out of a magazine for me. He had heard I liked to write, and he offered it to me as an example of what he thought was good writing. I was touched. The piece was an interesting, funny, intelligent article about the author's decision to try to make her food at home, and included a recipe for peanut butter. The article turned out to be the introduction to Jennifer Reese's book, Make the Bread, Buy the Butter: What You Should and Shouldn't Cook from Scratch--Over 120 Recipes for the Best Homemade Foods. 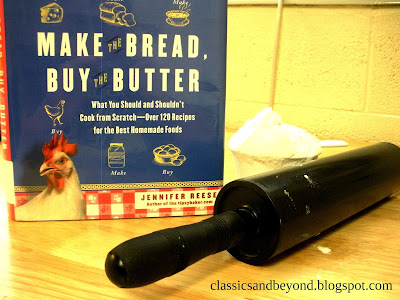 The book itself did not disappoint. Part cookbook, part memoir of Reese's hilarious and occasionally sentimental cooking adventures, Reese delivers a practical guide to trying to make one's food at home. She admits that some foods, like butter, just aren't worth the time/money/effort to make at home. Sometimes, she concedes, the store-bought version actually tastes better. On the other hand, there are a lot of foods that are cheaper and more delicious when made at home--and some take very little effort.

There aren't any pictures in this cookbook (other than a few Julia-Child-esque drawings here and there to depict a more difficult method in a recipe). This would normally be a major strike against a cookbook for me, but in this case, I didn't miss them too much. The recipes are supposed to be copycats of common foods we know and love--I already knew what they looked like, more or less. I guess the book might have been more aesthetically pleasing with photos, but I kind of liked the down-to-earth, literary feel of text-only.

Reese has an honesty and sarcasm that's refreshing in the cooking world. Those of us who read cooking blogs and cookbooks are often pounded by overwhelming bouts of enthusiasm--"Make this recipe like your life depends on it!!!"--and although the enthusiasm can be fun, it's nice to have a cook come right out and say, "This dish is pretty good, but it's unbelievably hard." Reese's introductions to the recipes were apt and often hilarious.

But the real test of a cookbook is always whether the recipes are any good. Since I got the book out of the library, I've made three recipes: Oreos, English muffins, and Nutella. The Oreos got mixed reviews (some of my family members said they liked them better than real Oreos, but my husband who loves Oreos barely touched them); I thought they were good, but I doubt any homemade cookie could ever duplicate an Oreo (which may or may not be a good thing). The English muffins weren't exactly like the store-bought, but tasted just as good and were much cheaper. And the Nutella--oh--I just about died with joy. It wasn't as smooth or as sickly-sweet as real Nutella, but now that I've tasted it, I don't think I'll ever go back to the waxy store-bought stuff. And what's extra-great about it is that you can conform it to your tastes, adding more or less sugar or cocoa.

This is one of the most pleasant, entertaining, and practical cookbooks I've ever read. I got it out of the library just to try it out, but now I'll undoubtedly buy it.
Posted by Unknown at 1:27 PM