On one hand, Dickens was a marvelous storyteller. His books have intricate, detailed plots that appropriately raise the tension little by little, while also offering characters that we can laugh at and relate to. His writing style is witty and engaging. And yet... 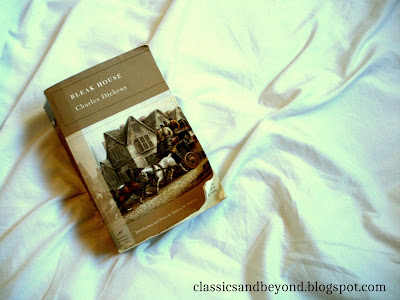 I don't know what it is, but I always feel that there's something missing in Dickens's novels. Perhaps it's an aspect of the characters. They're either too obvious, or not believable. Rarely do I find a Dickens character that is fascinating enough to me that I want to dig deeper.

Some come close, especially in Bleak House. Before reading this book, I had read three novels from Dickens: A Tale of Two Cities, A Christmas Carol, and Great Expectations. I liked them all, but I didn't really love any of them. (Except maybe A Tale of Two Cities--I came close to love on that one.) I felt like I still needed more in order to come to a conclusion about Dickens, so I leaped at the chance to read Bleak House, one of his longest works (which, I might add, is sometimes considered his best novel).

There were some obvious flaws (well, what a modern reader would consider flaws), wordiness being the biggest and ugliest. 300 pages into the book, I was still being introduced to the many different characters. I don't think there was enough foreshadowing on some points--after a certain character (avoiding spoilers here) became important, I couldn't remember anything about his introduction to the story. But in other aspects of the plot, there was far too much foreshadowing.

The annoying characters (Mr. Skimpole, Mrs. Jellyby) got too much time, but it was sort of worth it for the interesting characters (Lady Dedlock, Mr. Bucket). Esther Summerson was a disappointing main character for most of the book, but she grew on me by the end. (Seeing the way she was played by Anna Maxwell Martin in the 2005 BBC adaptation helped a lot.) In the end, the good parts and the less-good parts of the book sort of balanced themselves out to a pretty enjoyable novel.

Yep. That's pretty much how I felt about Great Expectations, too.

After reading an 800+-page book, I expect to be a little more emotionally involved in the story. I want to be drawn in. Instead, I was just relieved it was over with.

I'm willing to overlook the didactic tone, the sickly-sweet main character, the old style, even the wordiness--all the things that make Bleak House a typical 19th-century novel. Those elements were even endearing. But I do wish I would have felt more involved in this book. However, it was a good story, and it was interesting. (And it made for a wonderful BBC miniseries.)

After reading 4 Dickens novels, I'm beginning to feel that this is as far as it's going to get with Dickens--for me, anyway. I like Dickens. I enjoy his novels. But they don't draw me in emotionally. They don't stick with me forever. They don't make it to my favorites list. I think this is more an issue of personal preference than it is anything else. I hope that someday, after I've read more Dickens, I'll come to love him more.
Posted by Unknown at 12:13 PM